6/08/06 -- Tuesday evening (June 6th), Mark & I went over to Rob Evans house to pack their trunks with the blacksmithing supplies... or in other words, the blacksmith's shop they are taking with them to the Congo.  Mark started journaling tonight, so much of the narrative will be what he has written.

At the conference Sat. we were told that the weight limit for international flights had went from 70 lbs. per trunk down to 50 lbs.  This was a surprise.  I checked it out and found there is a $25 charge per trunk for overweight baggage of 50 to 70 lbs.  We decided we'd pay the extra fee and go up to 70 lbs.

Rob had the forge and blower he made already packed into trunks.  This took up a lot of space and weight.  We laid out everything and started with items we couldn't live without and then went to our second level items. We decided to leave two blowers with wheels and take the last blower without it's wheel since we might be able to make more of those there.  This saved us weight and space.  Since we're going over somewhat blind, we wanted to take as many tools as we could.  This will give us a working forge when we get there and the tools to start teaching (or learning from) the local smiths.

We then split out the duplicate tools so that they were divided between separate trunks (in case all the trunks didn't make it).  We came in at few pounds under the weight limits and were VERY relieved.

I had brought all my stuff with me (clothes, camera, food, etc.) to make sure everything would fit somewhere.  Rob gave me some ideas he had on how to pack, so I'm modifying my carry on and am hoping all of my non-blacksmithing essentials will fit. 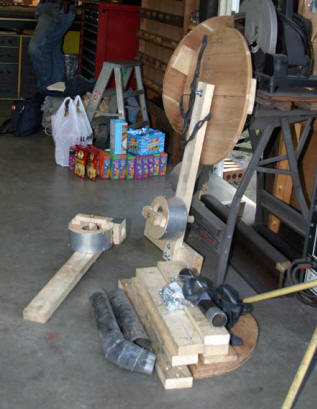 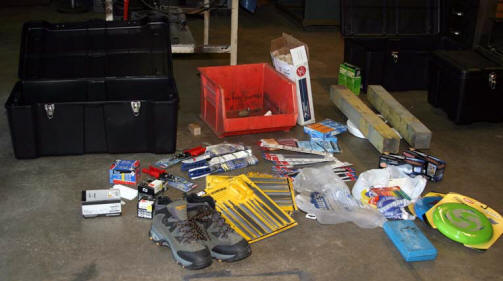 Above: Some of the things needing packed in the trunks.  In the left picture can be seen the blowers and wheels to be used to provide air to the forges.  There's food & Mark's clothes in the background (the ladder doesn't go). In the right picture there are inner tubes, LOTS of files, shoes, flashlights, pencils & pens, tin snips, bolts, clay & even a couple of Frisbees. 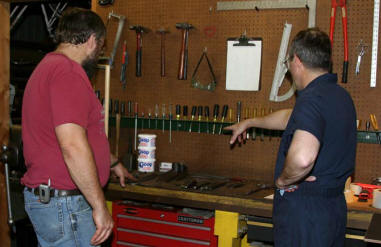 Above left: Mark & Rob debating which tools to take and which they can live without. Right: Weighing a trunk.  This one shows almost 60 lbs. 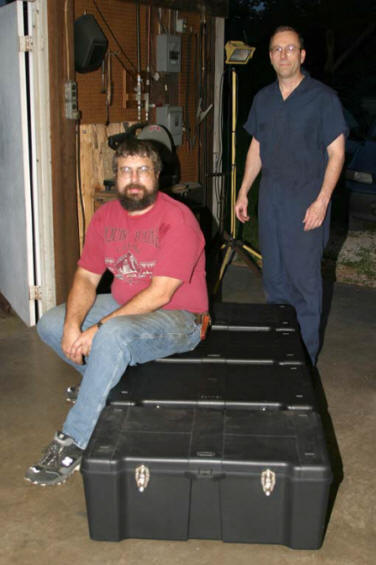 Mark & Rob with their 4 trunks.

They are very happy to be able to shut and latch them!  The forge table, seen in previous pictures, fills one trunk itself.  They took 2 blowers but left the wheels behind.  They are hoping for a bicycle rim when they get there.  They were happy that they were able to take almost all of the tools which they wanted to take.  That will help them to get the Congolese blacksmiths started on making their own stuff.  Packing went much smoother than anticipated and they were pleased with what they were able to include when they were finished.

6/07/06 -- Saturday (June 3rd), Rob & Mark attended the IBA Conference in Tipton, Indiana.  They took many of the items with them that they will be taking to the Congo.  The pictures show their little "Show 'N' Tell" area where they set their stuff out.  They were one of the most popular spots at the conference this year as they had several & various people visiting with them throughout the day asking questions and giving advice.  One of the most memorable was a fellow blacksmith who just couldn't understand why anyone would risk their lives in order to help someone else.  Mark's answer was simply that God could take care of them.  They also received tips from others who had done similar things in the past.  And they talked to many who simply thought that what they were doing was cool, seeing it as a dream-come-true.  Many blacksmiths desire going where there is almost nothing and see if they can still make what they need to survive.  The general consensus was that all wished to hear how it went after they return home. 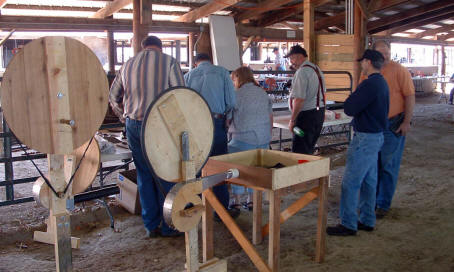 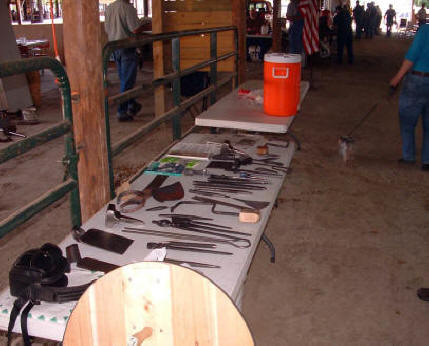 In the left picture above, you can see both the blower that Mark made, at the left, and the blower with table that Rob made at the right (actually more in the middle.  In the right picture, you can see the table which they had on display with several of the items they will be taking with them, as well as some of what they plan to make while with the Congolese blacksmiths.

06/04/06 -- I now have the website of the email updates from last year's trip to the Congo.  It gives a great deal of insight into what life is like in the village of Bulape where Mark & Rob and the rest will be going.  You can find it at http://www.whitewatervalley.org/wwvp/Mission/congo.htm

5/31/06 -- SHOPPINGGGGGG!  :o)  That was the content of this day.  We headed to Fort Wayne and found the clothes that Mark needed at the Goodwill & Salvation Army stores.  I was very pleased with what we found.  Some nice khaki type pants that will be cooler than regular blue jeans and a few button-up short sleeve shirts that he has been told it's best to wear.  He also found laundry bag (pillow case), small pillow, towel, & flannel sheet that he will take with him.  The price was very good and took some of the stress off of me.  God indeed does provide!  By the way, these will be clothes that he will likely leave in Bulape when he returns home.  We also went to Hobby Lobby and bought some modeling clay (excellent to use to teach blacksmithing cause it reacts like hot metal) and a chalkboard that he will cut in half so that, bwa-la!, he now has two (to be used to draw what they are doing as they teach... esp. useful when they will not be able to speak the same language).  Next Tuesday Rob & he will meet to pack their luggage, working to fit all of the things they are taking into their allotted weight limit.

5/30/06 -- This was sent to Mark, so I thought I would share it with you.  It is the latest cover story of Time magazine and concerns the Democratic Republic of the Congo which is where Mark will be going at the end of next week.  The title of the story is "The deadliest war in the world." http://www.cnn.com/2006/WORLD/africa/05/28/coverstory.tm/index.html  (This will likely move out of the cover story area when the next issue of Time comes out.)

05/22/06 --  Information received today was that the containers that were sent ahead in preparation for this trip to the Congo will not arrive in Bulape until July.  Obviously, that is after the men have made their trip and have returned to the states.  It's a good thing that they have been making things to replace them, eh?

Below you can see the stake anvil they have made to take with them.  They will be carrying 2 of these, not as many anvils as they wanted to have, but better than none.  And then the Congolese blacksmiths will have the track rails (pictured below) to use when they finally arrive in July (or whenever.)  This stake anvil is about 3" along the top and the stake's 4½".  It weighs about 5½ lbs. 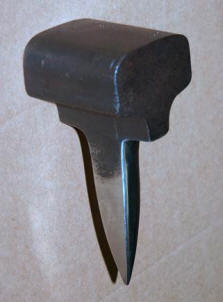 05/13/06 --  Mark & Rob worked on some more items to take with them.  They heard that the container that Rob shipped out a few months ago had not arrived yet.  This container held items such as railroad track to be used as anvils, various pieces of scrap metal, a bag of coal, a barrel bellows and a forge table.  Since they are not sure that it will arrive before they do, Rob built a portable "take down" forge that can be broken down and carried in his luggage.  This is also one of the reasons that Mark made the portable blower that he can take in his luggage and the plans so that more can be made there. You can see that forge table below on the right hand side.  At the left is the blower that Mark built which you can see in the other pictures I had posted previously.  They were wanting to use a tire rim as the driver for the forge blower, but it will not fit in the crates they are using for their luggage, thus they blower wheel that Mark designed. 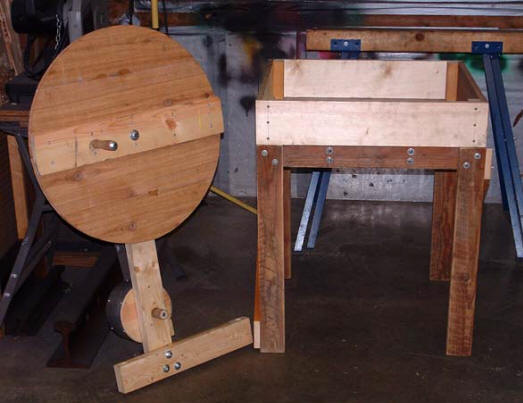 In the meantime, Mark spent a couple of days building more blowers to take with him.  Below you can see what the fan that goes inside the housing looks like, the pattern he used to cut the blower parts out of cedar wood (lightweight wood so they won't overload their baggage weight limit), and some of the cut parts that will make the blowers. 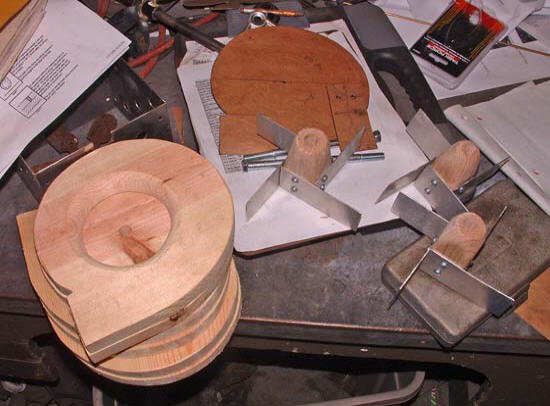 While they were working, one of the board members of the Congo Helping Hands, Inc. dropped by to see how they were doing.  At left is Bob Evans (no connection to the restaurant) and on the right is Rob Evans (no relation to Bob). 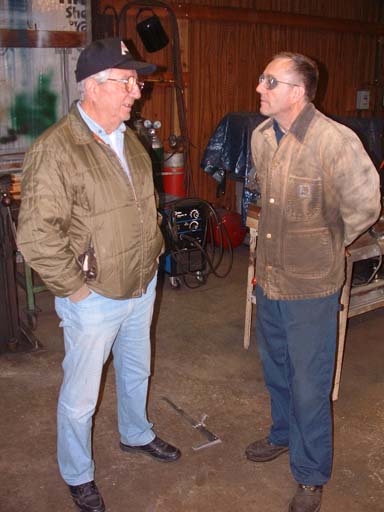 05/03/06 --  For the time being, we are still collecting contributions and prayer support.

Mark & Rob have met 3 times now to practice making tools and other items from various car parts.  Some people are wanting to give them tools to take with them, but they have no need for tools.  They will be making tools there out of the scrap metal.  They have been offered socket sets, wrenches & tongs, but these are not needed.  They will be teaching the men to make tongs, that way it becomes a reproducible item and not something they have to have shipped in when they break.  It's the ol' adage, "...teach a man to fish and he can feed his family for a lifetime."  In the same way, they teach them to make these things, and they can take care of their village for a lifetime and even longer as they pass the skills on to the younger men.  There is a greater need for money than for tools.  If someone is willing to buy the tools, it would be much more helpful to the trip if they could instead send the money to the Congo Helping Hands to lend financial support for Mark & Rob's trip.

Mark & Rob will be meeting Sat., May 12th, to practice making some more items.

Below are some pictures of the stuff they have already made.  In the left picture, you see some scrap car parts, towards the top a leaf spring and just below it a coil from a vehicle.  These were used to make some of the items seen.  As you can see, they have made tongs, chisels, screwdrivers, a hammer head, and some other items (in other words, I don't' know what they're called. *smile*) 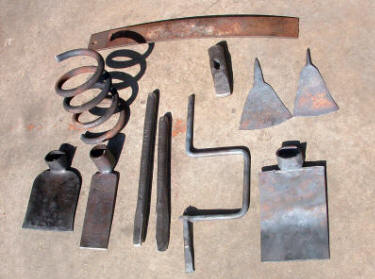 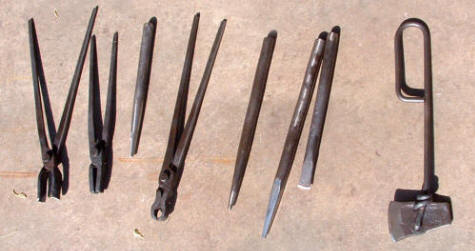 Mark has also been working on a portable (tear down) blower and Rob has already sent some pieces of railroad track rails to Bulape which will be used as anvils.  You can see the prototype for the blower and examples of the "anvils" in the pictures below. 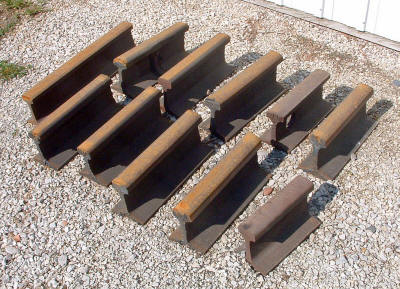